Construction of the Westminster Campus 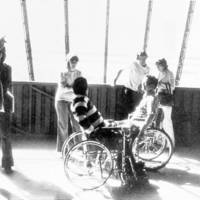 The origional Community College of Denver North was located on 62nd and Downing.  The doors were opened for the fall of 1968.   A transition happened where the campus moved to it's permanent home.

After relocating, the FRCC North Campus was opened Fall of 1977.   The campus is located on 112th in Westminster Colorado.  CCD North, started out having 160 acres to build it's educational institution. At the time there were 4,831 students.

During the hight of the energy crisis, FRCC Westminster Campus, was the largest known facility in the world that was totally solar heated.  The architects made the the campus into one long hallway in order to conserve energy.